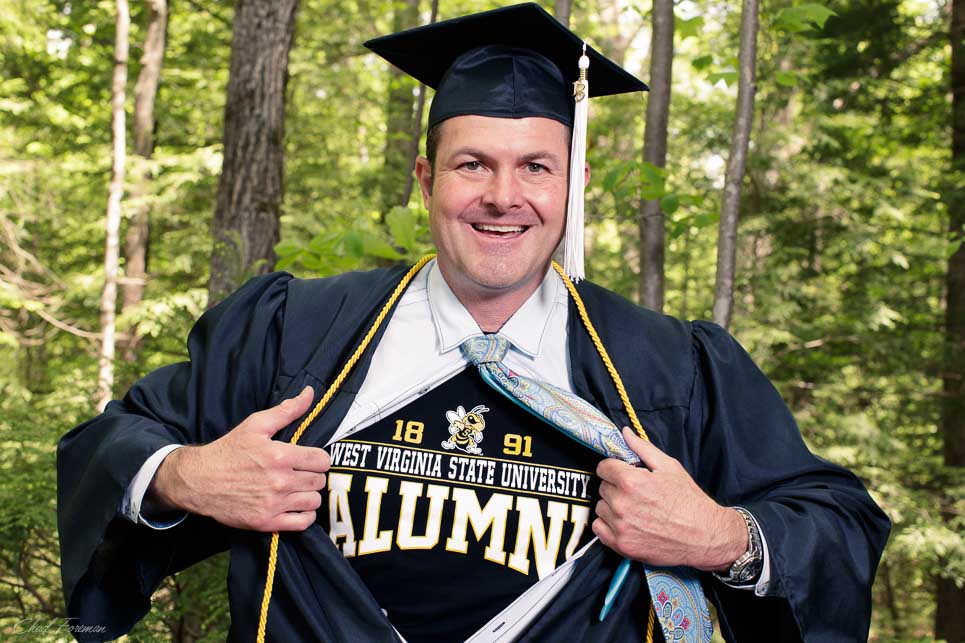 Chad Foreman Senior Picture. Here it is, the end of my formal education.

College Graduation finally arrived. At the age of 44, it was truly welcome. My college journey began in the Autumn of 1992. I didn’t expect to go to college that semester but since I didn’t leave for the Army because of my accident, I figured I might as well knock out some classes. What else would I do with my time? Back then I was at Columbus State Community College in Ohio. I chose Landscape Design as my major because it was the most creative class they had at that time. Some of those classes counted towards my graduation from West Virginia State University, some 26 years later.

A couple detours later, mainly working as a whitewater raft guide and video kayaker, I returned to college in 2006. This time the New River Community and Technical College in Beckley. I earned my Associate of Science in Communications Technology. That was a great introduction to all things digitally creative. In 2008 I went to West Virginia State University Institute of Technology, or Tech for short, in Montgomery, WV. I was a Graphic Design major but dropped out because I was getting freelance graphic design jobs. Why should I pay to do a skill when someone can pay me? 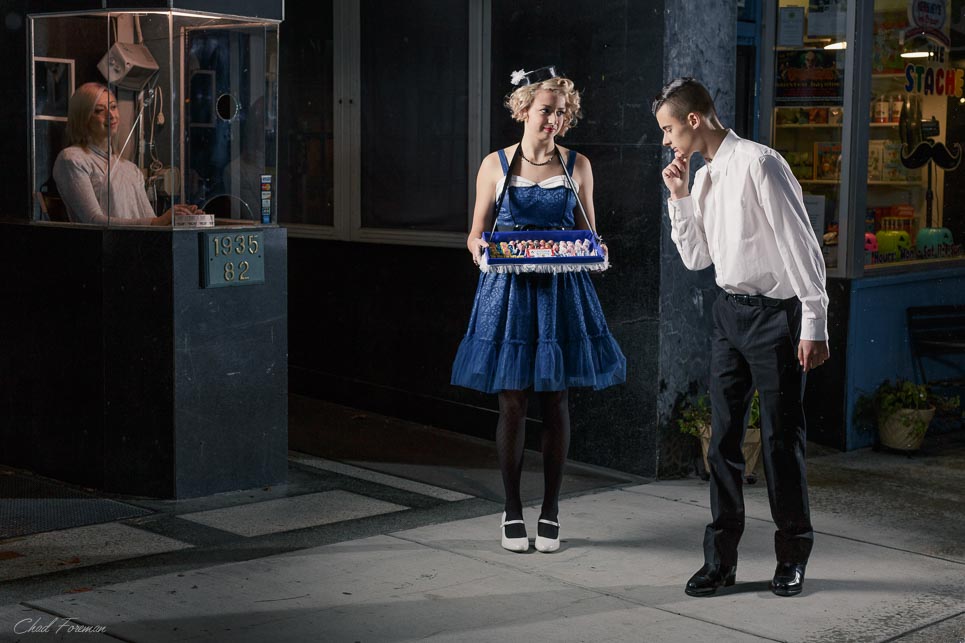 A Roundabout By Design

Skipping ahead, Graphic Design began to loose its appeal to me. I felt chained to a computer screen all day, every day. I noticed that I spent a lot of time editing photos of other photographers. Most of them were enthusiasts who volunteered their services in exchange for whatever. I knew that I needed to pursue my photography dreams.

In a roundabout way, grants and scholarships made finishing my education affordable. I discovered West Virginia State University had a program where I could study photography. It would be an hour and a half drive one way to class but I reached a tipping point in my life where I felt like the importance of finishing what I had started 26 years ago trumped the time I’d be spending in my car. 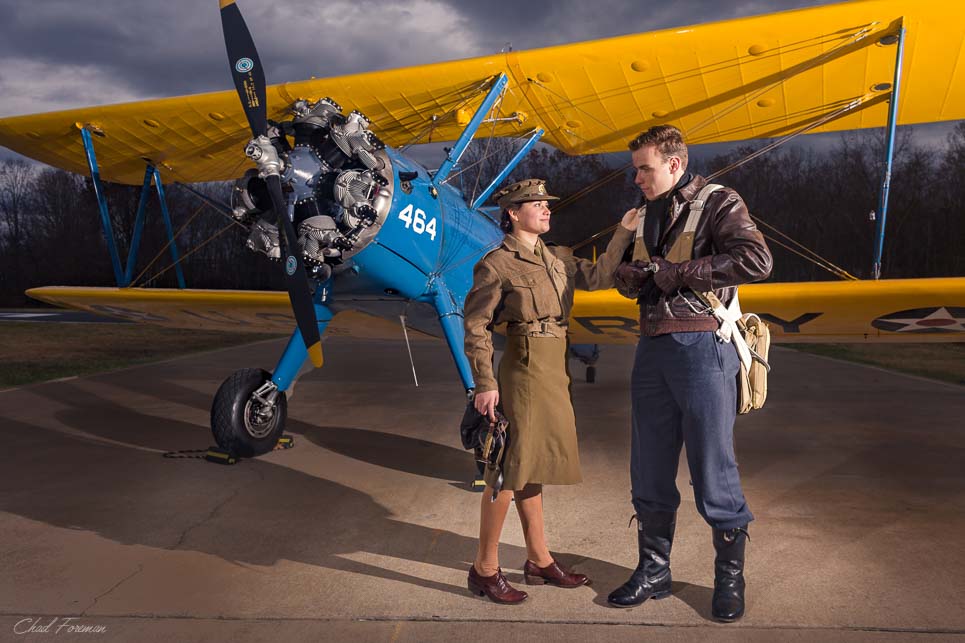 Preparation for my Senior Exhibit

When we were in grade school teachers prepared us for high school. When we were in high school they prepared us for college. College was to prepare us for a career. The culmination of that entire experience was my senior exhibit. It would represent a little bit of everything I had studied since elementary school. Now it would all tie together in a show to be displayed at the Davis Hall Fine Arts Gallery.

The previous semester I worked with my advisor to come up with the theme for my show. The theme would be represented in a cohesive body of work. My theme was photography in the style of Norman Rockwell. Norman Rockwell’s style has been described as an idyllic, stylized portrayal of classic Americana. His painting evoke emotion because almost anyone can relate to them. The facial expressions, the dramatic lighting, the scenes and the backgrounds. Everything in his paintings lend a part to the story. 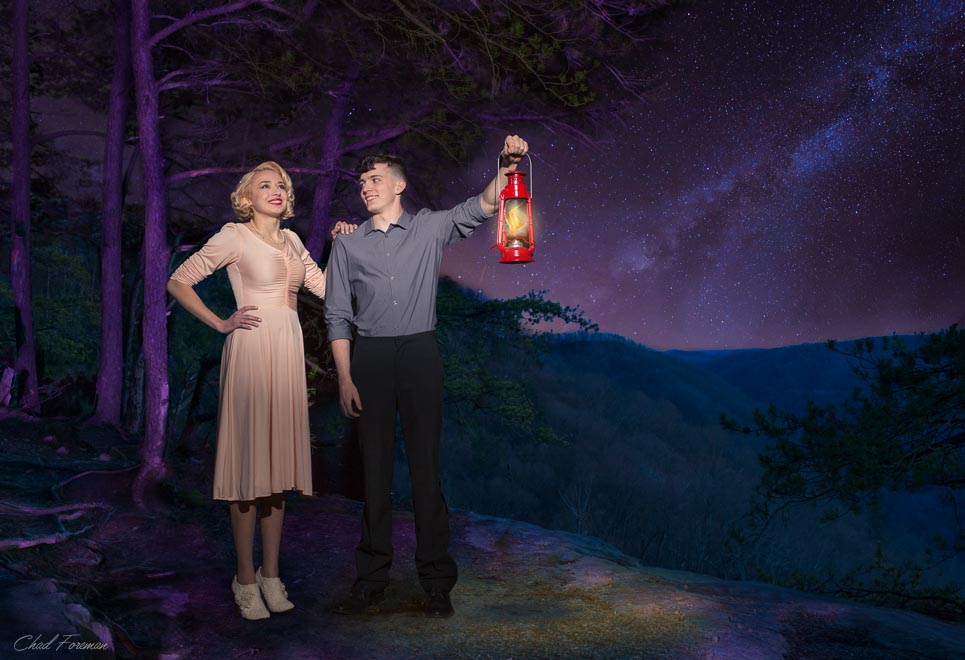 “Show Me The Stars” digital composite image with dynamic lighting. The concept for this image is a young lady from the city goes to the mountains to see the stars for her very first time. I used off camera flash and light modifiers to create the dynamic lighting. After my models left, I lit the background using the flashes with colored gels. All 4 images were composited to create the final photograph you see here.

This is what I tried to create. Not exact replicas of Rockwell’s paintings, but something in his style with my own creative twist. I kept the themes simple. Two of my images I had captured in the previous semester, Autumn of 2017. You can read more about those images in my last blog post, but I will include them at the end in case you don’t have time to read about it.

In that previous semester I was working on creating images with dramatic light, often called “cinematic lighting” because it has high contrast and directs the viewer’s attention immediately to the subject. Techniques I was using I learned from Chris Knight and his most recent book, “The Dramatic Portrait.” For those images my goal was to get it right in camera and not use any image manipulation in Photoshop. A few minor adjustments were required but nothing extensive. 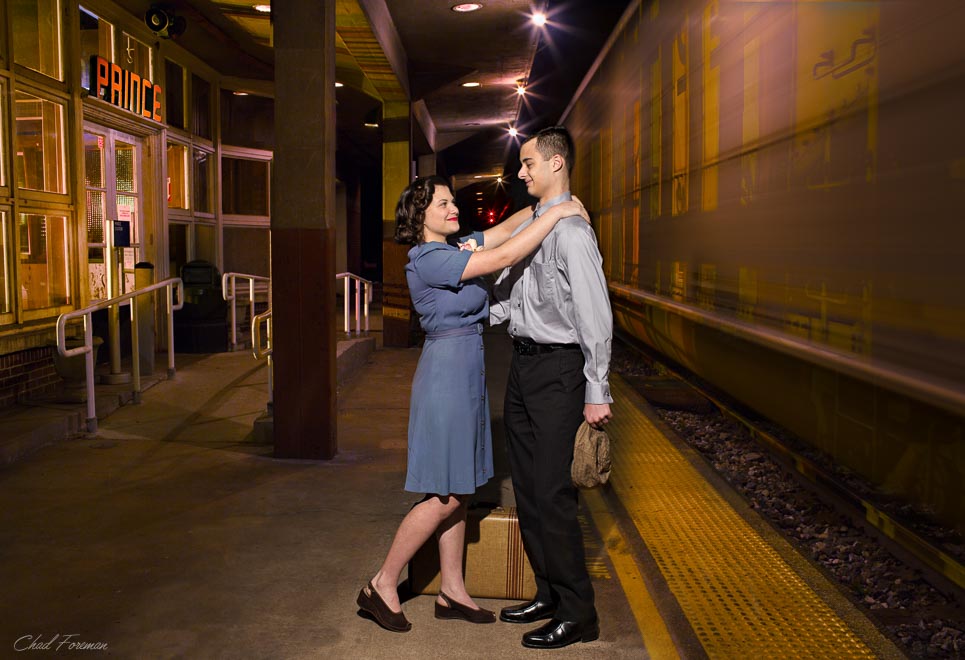 “Prince.” digital composite photograph. Made at the Prince Amtrak Station in Prince, West Virginia. This image was lit with off camera flash. My camera remained on a tripod. After my models left, I photographed the train station, using my speedlites to light the station how I saw fit. A train just happened to go by at that point. All images were composited in Photoshop.

This semester, being that my specialty is Digital Photography, I chose to take full advantage of the digital technologies available. That includes using off-camera flash to generate dynamic light on my subjects as well as compositing multiple images in Photoshop. This was accomplished by shooting the same scene on a tripod in multiple images. Some images had my models in them, some didn’t. In some I took my speed lights and lit separate parts of the scene individually.

The frames were made from discarded pallets. This is something I’ve been working on for a couple of years now and I saw it as an opportunity to step up my game to the next level. The frames came out great and I am very happy with them. 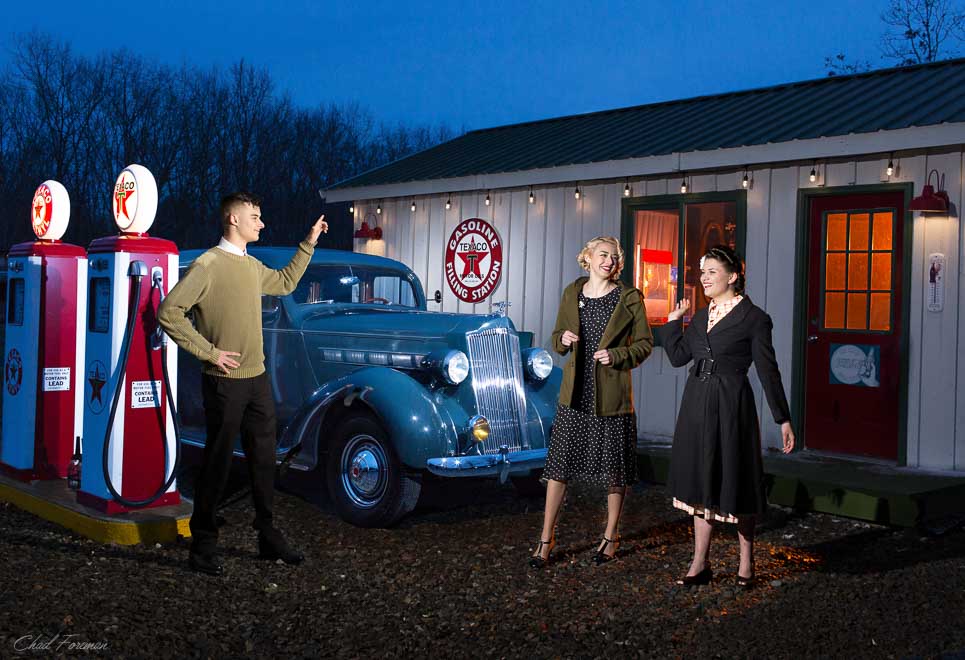 “The Filling Station.” Nostalgic Dramatic Digital Composite in the style of Norman Rockwell. The Wild Blue Adventure Company in Fayetteville, WV was kind enough to allow me to use their “filling station” to shoot this photograph, along with their 1940 Packard.

My show was a blast. We had a nice sized crowd and I was able to talk about my work to the viewers. What a great experience.

Graduation day finally came. It was quite a heavy experience to say the least. All of the memories of school over the years flooded through my head as I walked into the auditorium. My mom, sister Carrie and Uncle Mike were in attendance. It was really special to look up and see them in the audience.