Last night was homecoming for Oak Hill. You gotta love it. As I walked into the stadium and across the football field, the floats were lined up on the track, on display for all the fans and the community that wasn’t able to see them in the parade.

There’s something about the fall that brings that sense of nostalgia. The warm sun and the cool shade. The crisp, Autumn evenings. The scent of the trees as they loose their chlorophyl and begin to change color. The earth is more pungent. One thing I like about shooting football games in Fayette County, West Virginia, is that they still play football on natural grass. There’s nothing like the smell of the grass and the dirt below it this time of year.

The band marches onto the field and makes a hallway for the players to charge through on their way out on to the gridiron. Gridiron. What a great word. It sounds just as tough as football itself. When I was in New Zealand, the Kiwis all called American Football Gridiron, because, well for some odd reason they call soccer, football. Weird. 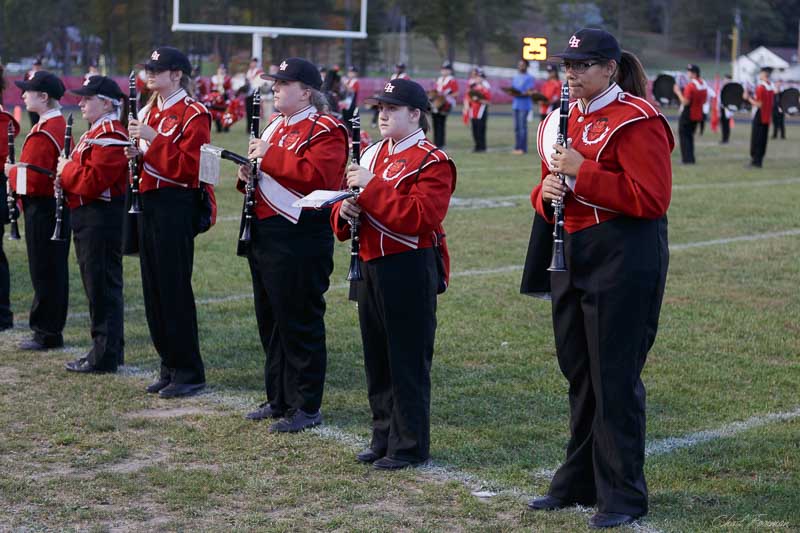 Oak Hill band members make the tunnel for the players to run through.

Football season makes me think of my coach, Coach Podlasiak. Plaz for short. Coach Plaz was awesome. That man had a greater effect on me than just football. Coaches tend to do that. They’re that adult, outside the family, who helps you learn stuff and apply discipline, yet, there’s a factor of friendship and respect that is unique to that relationship. Coach Plaz was also my track coach. Track was my other favorite sport. I was a pole vaulter. From my youth, growing up next to Capitol University, I used to watch the collegiate pole vaulters and I knew one day that I was going to do that. 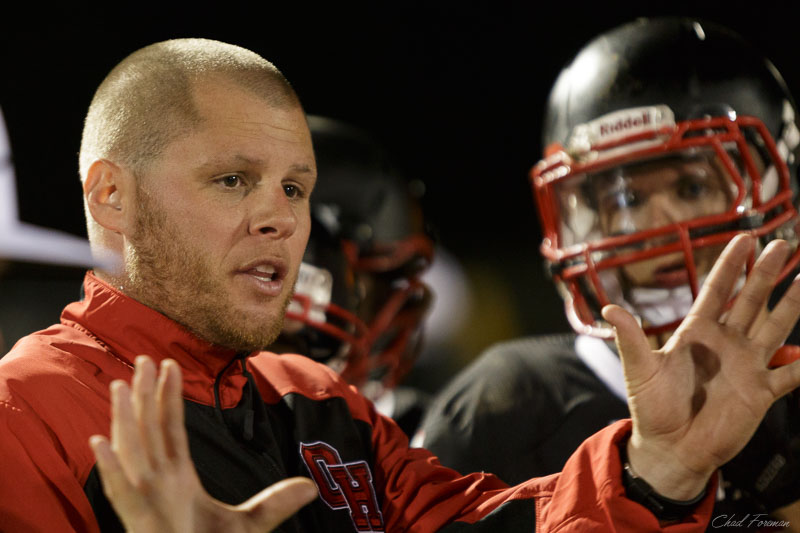 Coach Blankenship instructs a player. This coach will have a huge effect on this player’s life.

These days there aren’t as many pole vaulters as there once was. My own alma matter, Bexley High School, doesn’t even have pole vault. Neither does Oak Hill. It’s sad. The remains of a pole vaulting program are still on the field of Oak Hill. That’s a disgrace. We used to haul our pole vault pits in and out of the shed every day because we didn’t have a cover to leave them out overnight. It made us stronger and better vaulters. 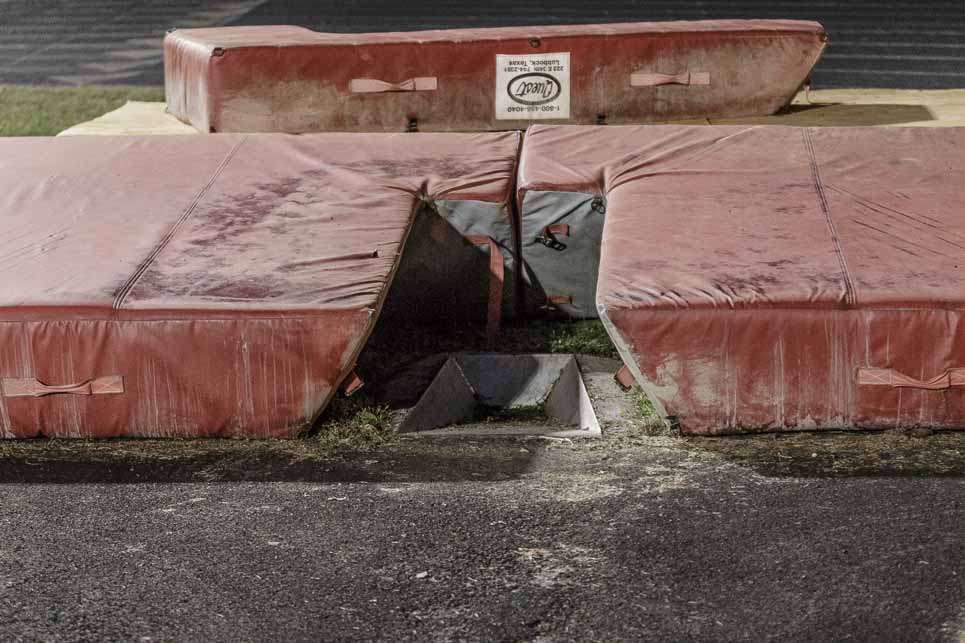 The remains of a pole vault program that no longer exists.

Back to the football game. I’m not really a sports reporter and I have to leave at halftime to get these pictures to the Beckley Register-Herald before 10PM. Unfortunately, it appeared like Princeton was going to run away with more than the ball. They were up 21-7 at the half. 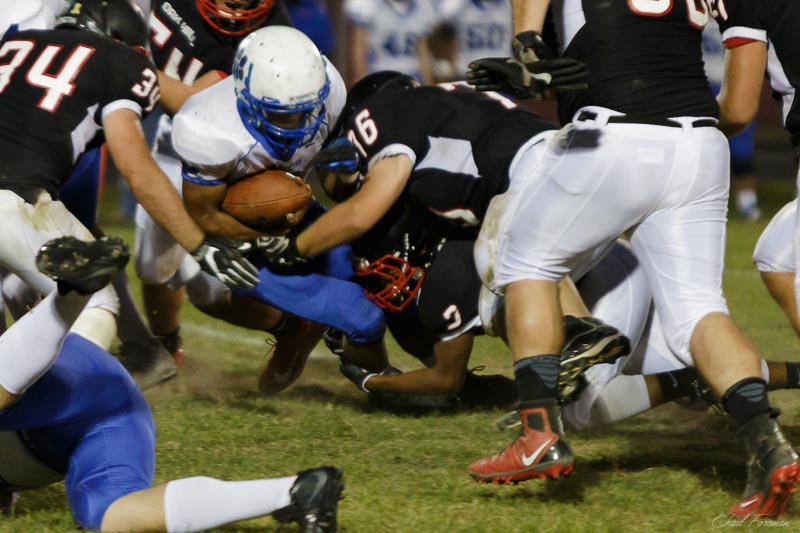 Princeton didn’t just dominate the game, they dominated the stands. Their band was every bit as good as Bexley High School’s band, and we have a GOOD band. A band that’s a college-level marching band type band. Princeton’s band was that good too. They were playing Green Day’s “On Holiday!” I couldn’t believe it when I heard it. Cracks me up because when I was in the high school band, we played songs from my mom and dad’s generation. Oh goodness. 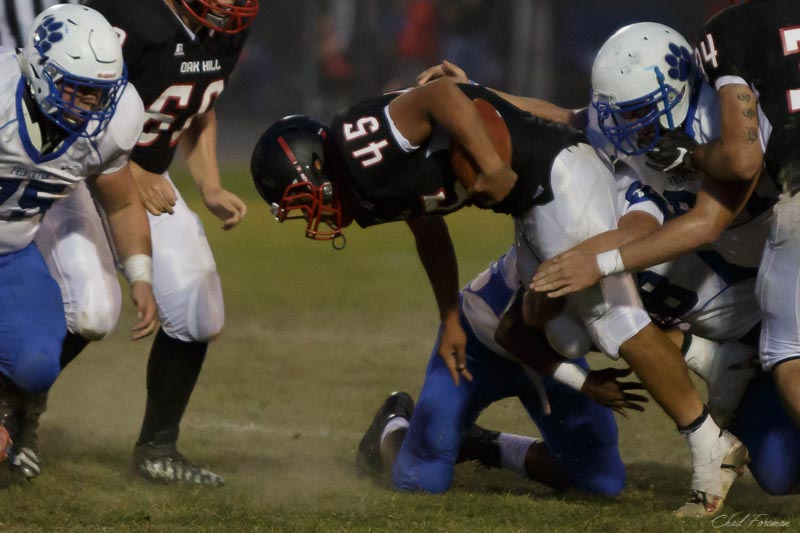 There is only one grand stand at Oak Hill, another cool thing about local, small-time football. When Princeton scored, it was every bit as loud as when Oak Hill scored. Between the cheerleaders, dance team and drill team, Princeton must have had 50 high school girls cheering on their team and doing coordinated dance routines while the band played. It was almost as if Oak Hill surrendered the “Home Team” advantage. 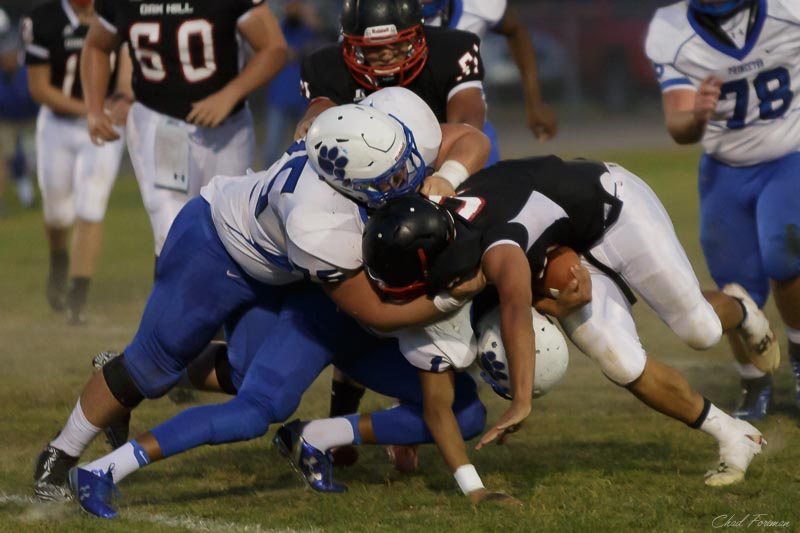