It’s that time of year again. The evenings are a little bit cooler, the days aren’t quite as hot. The school busses are running. Kids are in school. It’s a nostalgic time of year. A fresh start. Everyone’s ok with hitting the books because they’ve had a nice break.

It’s also time for football. Football means a lot of different things to different people. For me, it represents a growing up, a coming of age. Experiencing strength and a competitive spirit as a young man. The feeling of a desire to annihilate your opponent. It’s been there since the dawn of humankind. Football also makes me think of my dad. He loved football. It was something that brought us together, even though I didn’t like it when he coached me. I just wanted him to watch me play and tell me good job. He just wanted me to be the best I could be. 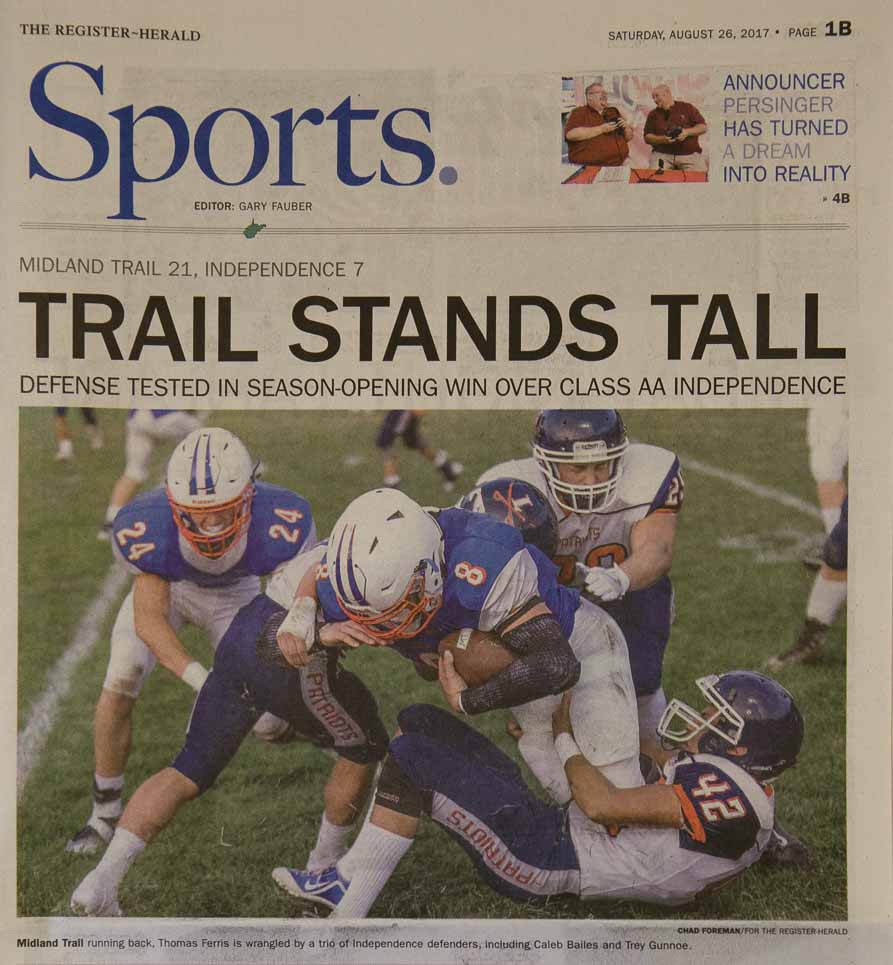 It’s an honor to have my picture chosen to be on the front page of the Sports section of the Beckley Register-Herald.

There’s school spirit and a uniting of community. There’s a special feeling that comes from seeing the school parking lot full of cars, lined up to get in and get a good seat before kickoff. The high school kids, hanging out with all of their friends. The young kids tossing footballs back and forth in the grassy areas behind the grandstands.

The smell of popcorn in the air. The play-by-play announcer’s voice over the loudspeakers. The Dolby surround sound effect of a group of referees all blowing their whistles at the same time.

The smell of grass this time of year. I’m very thankful that most of the schools in Fayette County play on natural grass fields. It might be cheaper in the long run to use that new artificial surface, but nothing compares to that true bond with nature that comes from getting your face mask buried in the dirt. 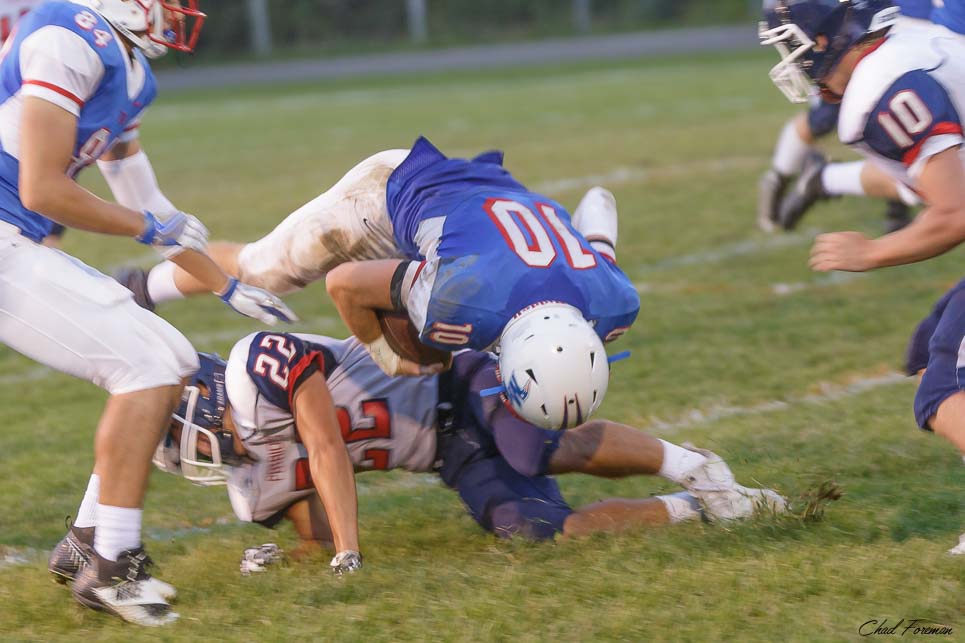 It’s an honor for me to have the privilege of photographing high school football for the Beckley Register-Herald. It’s game time again for me, but in a different sense. My favorite part is feeling the pre-game excitement. People in this area love their high school football and I want to deliver quality images for them. I gotta have my game face on.

Before the play starts, I focus in on the quarterback. I have to read the play, just like I was playing outside linebacker for the Bexley Lions in 1992. If that play turns into a sweep in my direction, if the running back or quarterback are coming around the end, I’m getting a little rush of adrenaline. It’s almost as if a hole opened up in front of me in the line and I know, I get to make the tackle. 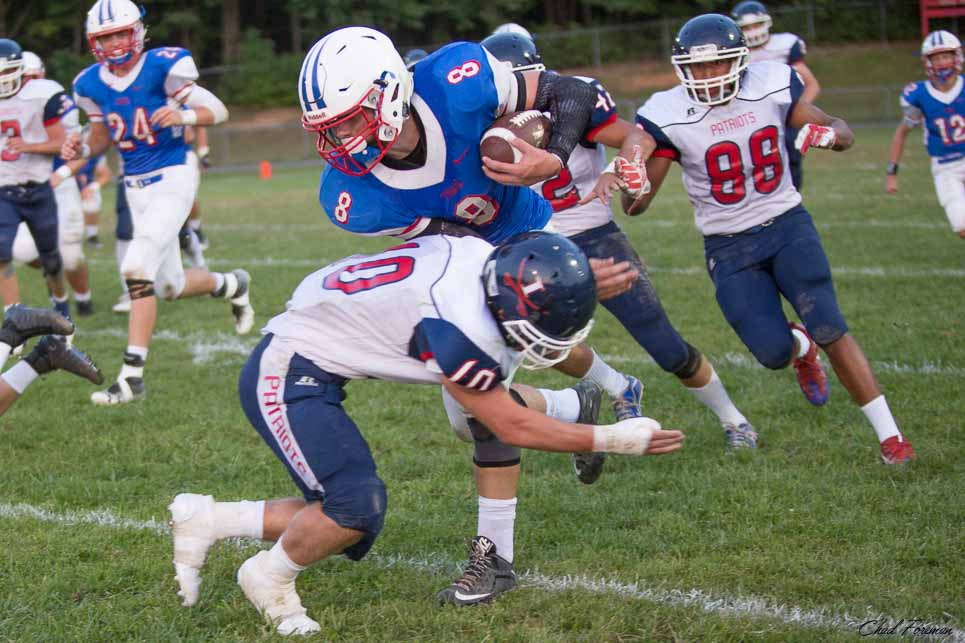 I may not get to crash into that running back, but if I get a good shot of that young man who just did, I’m excited. I’m almost as jacked up as if I just made the tackle myself! Well, maybe not. No, definitely not, but at this age, it’s the best I can get and I’ll take it.

I’m excited to start blogging again. There’s a lot more I could say about football and blogging and photography, but hey, it’s only the first quarter! 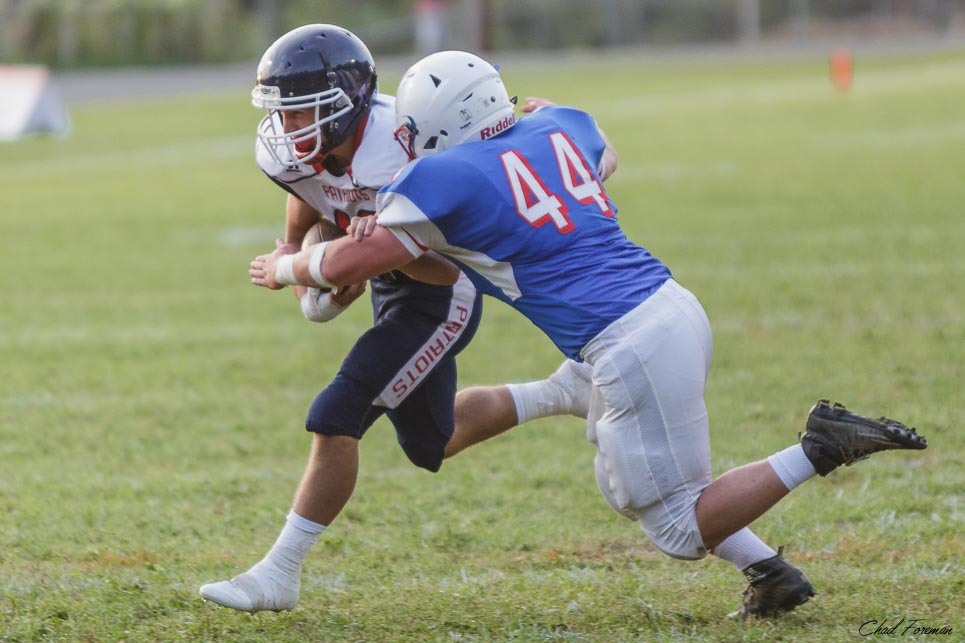